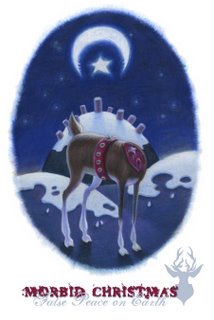 I never thought of myself as having a pronounced dark side, but between this and Smitten I'd say it's coming out... in force. I don't know WHY these things are popping into my head. But that's just what happened this morning, when I was just in that place between sleeping and awake, this image popped into my head, and I didn't forget it - during the course of the whole day. I finally sat down to sketch in the late afternoon... and I didn't stop. I kept it going. So now it's done. I believe this is my FIRST OFFICIAL NEW AND COMPLETE PIECE for Illustration Friday! Hey, it only took a year. And since my friend, Jonsie, totally called me out last week, I thought it was about time I followed through. So there Jonsie! What do you think of that?! ;P

And, as a special christmas bonus, here's a sample of the work in progress:

Posted by melinda beavers at 1:11 AM 9 comments: Links to this post 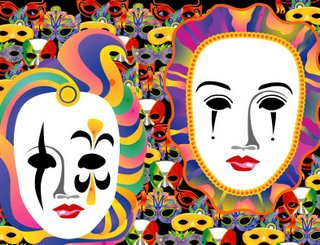 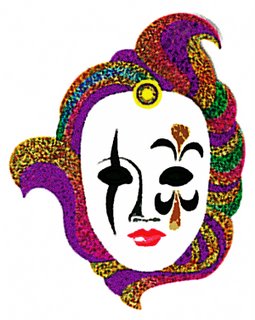 I've been working on a series of pieces based on the IF themes (actually thinking about and preparing for, but NOT actually drawing.... yet). But, I see them taking a little longer than 1 week... or at least longer than I have to give them in a week. So for now, I still have to resort to an old, sub-par piece I did years ago. This is from a sticker sheet of Marti Gras Masks. Sorry for the bad scan - I will try to replace with the clean vector art later.
Posted by melinda beavers at 5:40 PM 1 comment: Links to this post

Email ThisBlogThis!Share to TwitterShare to FacebookShare to Pinterest
Labels: Digital, IF 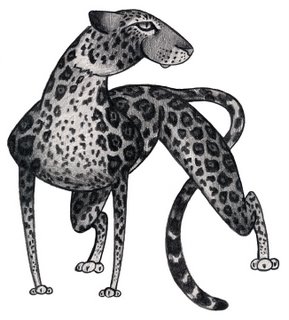 Wow, guess I missed four weeks in there somewhere. I am so exhausted with work... only a small portion of which I actually enjoy, but c'est la vie. Once again, I ran out of time - so here's something old... many years onld in fact. But I always kinda liked him, he's a "mighty" lookin' cat after all.
Posted by melinda beavers at 5:51 PM 9 comments: Links to this post 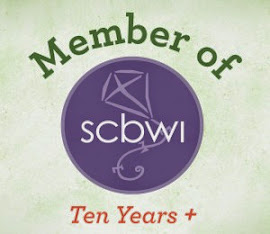